Proposing a new contribution to the understanding of autism

Studies of children who exhibit autistic characteristics have shown that many of them may also have various kinds of biological abnormalities. It is not clear, however, where this all starts. One observed abnormality may follow from another known abnormality, but is there another factor, one that has not yet been recognized, that must also be present for autism to manifest? Can that factor be the fundamental cause?

“The brain and body function as a whole system, and the brain can be thrown into chaos by triggers from the whole system.”

Dr. Herbert believes that the problems begin in the gut, manifest as inflammation and, later on, affect the brain. She suggests that treating the gut, replacing vitamins B12, B6, folate, omega 3 fats, vitamins A and D, magnesium and zinc, eliminating gluten and casein from the diet, detoxifying from mercury and lead-might be the best way to get autistic children’s brain connections working again.

Among the many factors that others have suggested can damage the gut of a child who is genetically susceptible to autism are: live measles vaccinations, toxic metals, overuse of antibiotics, abnormal gut flora, and food allergies.

A new direction of inquiry

Researchers and clinicians working on the puzzle of autism have been studying the mind-body connection. We propose that a more complete picture must also include the interaction of mind and body with the Master Gland, the pineal gland.

The pineal gland can be seen not only as a gland which affects the activities of every cell in the body but also as a receiver of information. The pineal gland, through its calcite microcrystals which have piezoelectric properties (Baconnier, Lang et al), responds to electromagnetic fields and possibly other signals, and transforms them into a form that can be sent to other organs in the body.

The pineal gland is the first gland to be formed in the human embryo. According to Dr. Reiter, it can be clearly distinguished three weeks after conception. The pineal gland is found at the center of the brain and is its only unpaired organ. It projects into the third ventricle, in direct contact with the cerebrospinal fluid that carries information and life energy throughout the body.

The pineal has profound effects on all systems of the body. Its neurohormonal messengers, principally melatonin, enable us to live in harmony with the body, its environmental rhythms and the surrounding universe.

A new perspective on autism

According to Andrea Axt Ph.D., autism is a reversible disorder involving aspects of the body, mind and spirit. It is influenced by genetic susceptibility, but is not a genetically determined, unchangeable brain disorder. By systematically addressing all the factors that create disordered functioning in an individual’s body-mind-spirit, autism can be reversed.

Our therapeutic approach works with the whole body, with special attention being paid to the pineal, the Master Gland which affects all the systems of our body. It is important also to simultaneously address metabolic dysfunctions caused by environmental toxins, including fluorides (ref.: Dr. J. Luke), to correct deficient diets, and to ensure that the body receives the exposure to light that it needs.

Energy bodywork can help at every stage of the therapeutic process that we have developed with the aim of healing autism. This process includes the treatment of pineal gland malfunctioning that leads to the production of hallucinogenic substances that distort an autistic child’s perception of the world and may affect other systems in the body. The diminished levels of melatonin which have been observed in autistic children are likely a consequence of a pathway that produces hallucinogenic compounds instead of melatonin and serotonin.

Energy body work can also help diminish the stress which enhances the release of toxic catabolites into the system, undermining the immune system.

According to Andrea Axt, Ph.D., one of the reasons of the malfunctioning of the pineal gland, which is sensitive to electromagnetic fields, comes from being bombarded by the EMF radiation emanating from cell phones, iPads, tablets, WiFi routers, etc. Consequently, there has been a huge growth of the number of children diagnosed with autism.

Understanding the physiological processes at work in individuals exhibiting autism-related behaviors can clearly contribute to the development of effective means of early diagnosis and therapy. Identifying reliable markers by simple laboratory tests can be a first important step in that direction.

This brief report summarizes a very promising result of urinalysis of 8 subjects that identified the presence of hallucinogenic substances in 4 of the 5 subjects that had been diagnosed as autistic. No such substances were present in the urine samples of the three control subjects. It suggests the availability of an important piece of information accessible by a simple analytical method. This finding may constitute a significant contribution to the understanding of problems that may arise with the melatonin-generating system.

The first published hypothesis that specific dysfunctional conditions of the pineal gland can contribute to symptoms of autism was presented in [1].

That paper proposed that some forms of autism can stem from disturbances of the melatonin generating system, and that hallucinogenic indolamines can be formed in the pineal gland instead of melatonin. Further supportive research results may be found in [2] and [3].

In the next step, a larger number of subjects with autism will be tested in order to confirm the above discovery of hallucinogenic compounds in the urine of autistic individuals. Such a confirmation can lead to the use of TLC, a low-cost analytical method, to identify the marker substances we have identified to diagnose autism at an early stage of child development when therapies can be most effective.

Further research following confirmation of our preliminary findings would focus on the development of a safe method to block the creation of hallucinogenic compounds while allowing the normal functioning of the melatonin-creation pathway.

The next step into research into the creation of hallucinogenic compounds in autistic children has been conducted and confirmed at the Department of Chemistry of Lodz University of Technology, Poland, and published in Biomedical Chromatography in March 2017, by Joanna Kaluzna-Czaplinska, Jagoda Jozwik-Pruska, and Andrea Axt. The abstract of this publication is provided below, and the complete paper can be obtained from the Wiley Online Library here.

Chromatographic determination of harmalans in the urine of autistic children.

This paper presents a new approach to autism - a complex and still enigmatic condition. We present the results of our preliminary research which was based on the detection of the hallucinogenic substance 6- (or 10-)methoxyharmalan in the urine samples of autistic children with the use of chromatographic methods. Additionally, we aim to describe the relationship between the level of tryptophan and harmalan, and the influence of supplementation on the level of this compound. We applied HPLC-UV/vis, HPLC-DAD and LC-MS in order to determine McIsaac's compound in the urine samples obtained from autistic children (n = 132) and healthy individuals (n = 10). The level of tryptophan was quantified with the use of GC-MS. Our research shows the presence of the McIsaac's compound in 110 samples of ASD children contrary to healthy children, where it was not found. No relationship between the level of tryptophan and 6-methoxyharmalan was noticed. The study shows a strong influence of melatonin supplementation on the presence of the McIsaac's compound. We believe that the results of our research can contribute to a better understanding of autism spectrum disorders. Moreover, our findings can form the basis for other studies focused on autism, eventually making it possible to understand its etiology.

Further research will be conducted on methods of stopping the reaction of the creation of McIsaac's compond, thus opening a pathway to helping eliminate autism. 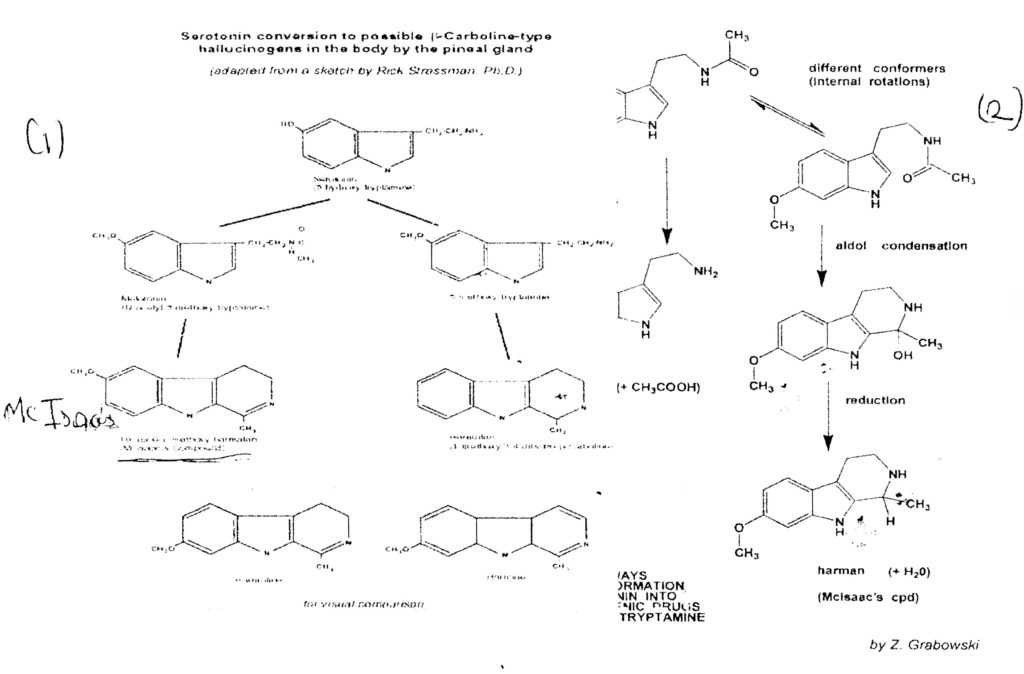 To such chemical compounds (which are mainly O or N methylated biogenic amino substances) belong for example: DMT, Bufotenine and as I postulated and proved also hallucinogenic 10 or 6 methoxyharmalan- so called McIsaac's compound. McIsaac's compound can be created in autistic (ASD) individuals from or instead of melatonin. The presence of hallucinogenic McIsaac's compound was found in 120 urine samples of children diagnosed with autism and published in our article. (6,2 ) 10 methoxyharmalan-McIsaac's compound, has been described as a product of cyclic dehydration of melatonin(see illustration 2) Dr. Rick Strassman describes in his book DMT -The Spirit molecule, a Cellular Security System existing around the pineal gland which serves as a shield inhibiting the production of DMT. He proved that the pineal defense shield can be overridden by extreme stress and trauma. (8)

I propose that the same process is in place for the creation of hallucinogenic McIsaac's compound. I postulate that strong physical and emotional traumas during the gestation period, birth, and later, such as mothers' and babies' emotional shocks, pesticides, fluoride's, vaccination, and the ever now increasing presence of electromagnetic fields from Wi-Fi, tablets, cell phones, etc., can override the pineal defense shield, especially in sensitive traumatized individuals. The presences of small crystals of calcite with piezo electric properties in the pineal gland, has been proven (3 ). This would affect individuals sensitive to electromagnetic fields (EMF).

Insight into Autism: A life Calling

Andrea Axt discusses her work and research with Autism in the following video.